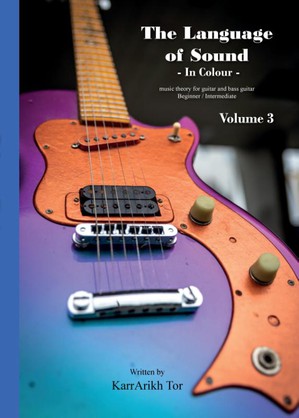 The Language of Sound – in colour Volume 3

Music Theory: The Language of Sound, reveals the secrets of the guitar and bass guitar. It can be scary to get into music theory for a guitarist or bassist but this is a great place to start. You will never need another chord book or theory book again. The Language of Sound teaches you how to build chords from the root and play melodies in any Key. The graphics tie the fretboards of a guitar and bass guitar to the piano keyboard and sheet music, making it a valuable tool not just for guitarists and bassists but for every member in a band. Fast and handy for any music theory student. Includes the 'boxes' and repeating patterns on the fretboards, positions for all chords, and positions to play scales in any Key. The Language of Sound teaches how to arrange chord progressions to a melody, and how to transpose any song from one Key into another easier to perform Key. Easy to use and valuable for guitarists, bassists, and keyboard players. The Language of Sound - In Colour - Volume 3: contains chapters 7-9, and “Chords in the Key of…” appendix from the full textbook Chapter 7 - additional notation for the staves, additional notations for tablature Chapter Seven examines additional notations that can be used on staves or in tablature. Introduced in this chapter are: Dynamic symbols (including Forte, Piano, Crescendo, Diminuendo, Fermata, Marcato, Sforzato, Tenuto, Portato, and Staccato), Octave shifts (using 8va, 8vb, 15ma, 15mb, 22ma, 22mb), Grace notes (Acciaccatura, and Appoggiatura), Tied notes, Slurs, Repeat measure symbol, Barlines, Brackets, Braces, Prima Volta, Seconda Volta, D.C. (Da Capo), D.S. (Dal Segno), Fine, Coda, Segno. Chapter 8 - chord arrangements, transposing songs, modes, progressions Chapter Eight examines adding chord arrangements to a melody, transposing songs and working with modes in a chord arrangement. Chapter 9 - enharmonic chords and naming chords Chapter Nine examines naming chords, choosing between enharmonic chord names, and naming a group of notes as a chord.