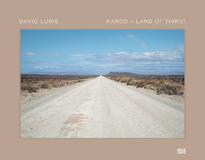 The 'Karoo' (meaning Land of Thirst) is a semi-desert landscape in the high plains of South Africa, occupying nearly a third of the country. Due to its extremes of climate, this vast hinterland was largely uninhabited by European settlers until the early nineteenth century, but since then intensive sheep farming has destroyed the Karoo's sensitive ecological balance, which has become increasingly arid, even compromising South Africa's food security. In his highly subjective style, Lurie captures the vast, barren Karoo plains, stone mounds, gravel roads, abandoned towns, and rare water sources. His images inquire into the influence of humans on the environment and remind us of the importance, as well as the fundamental beauty, of nature.

David Lurie (* 1951) taught philosophy and worked as an economics consultant before turning to photography. He returned to South Africa from the UK in 2011; he now works and lives in Cape Town.