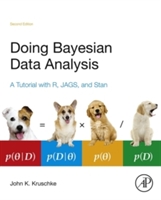 Doing Bayesian Data Analysis: A Tutorial with R, JAGS, and Stan, Second Edition provides an accessible approach for conducting Bayesian data analysis, as material is explained clearly with concrete examples. Included are step-by-step instructions on how to carry out Bayesian data analyses in the popular and free software R and WinBugs, as well as new programs in JAGS and Stan. The new programs are designed to be much easier to use than the scripts in the first edition.

In particular, there are now compact high-level scripts that make it easy to run the programs on your own data sets. The book is divided into three parts and begins with the basics: models, probability, Bayes' rule, and the R programming language. The discussion then moves to the fundamentals applied to inferring a binomial probability, before concluding with chapters on the generalized linear model.